In a recent Google Academy on Air presentation, businesses managing AdWords campaigns learned how to find new, qualified users, called similar audiences to increase their click-through-rate (CTR) and conversions. These are audiences who have the same characteristics as your customers, those who have recently completed a conversion on your website after clicking on a paid ad.

Google first lays out the audience framework, the process for setting up the similar audiences feature on your AdWords campaign. In previous presentations, Google had discussed the previous 2 of the 3 steps, Identify and Re-Engage for how you can find potential customers and drive them to take action after clicking on your ad.

In this presentation, Google will be focusing on the third step, Expand, that will allow you to extend your reach to additional qualified users who have never interacted with you before. 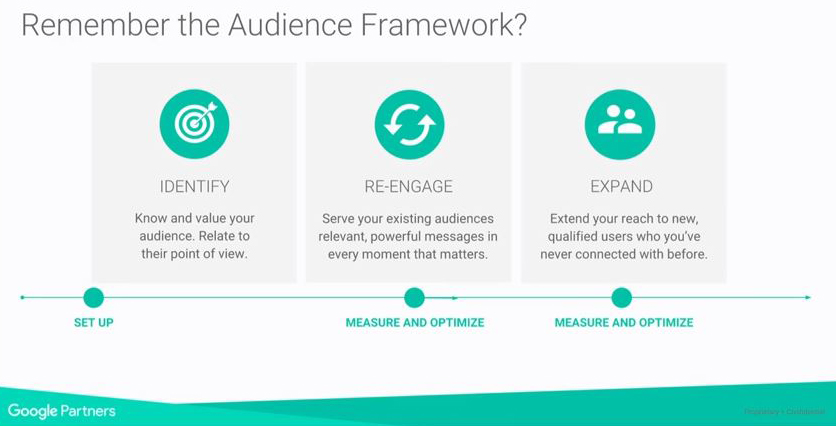 Important Note: Before discussing how expanding your reach to similar audiences can benefit your campaign, Google stresses the importance of using remarketing lists. This is because:

In Google’s marketing funnel, similar audiences plays a big part in influencing consideration. With similar audiences, you will be able to find new audiences who share characteristics with your website visitors. After showing interest and clicking on your ad, you will then be able to drive action and grow loyalty from them.

So within your remarketing lists, Google will choose new users who “look” like them, thus, developing your similar audiences list. This in turn leads to more qualified users coming through the door, allowing you to drive reach while focusing on efficiency.

The key benefits of similar audiences are included in the screenshot below: 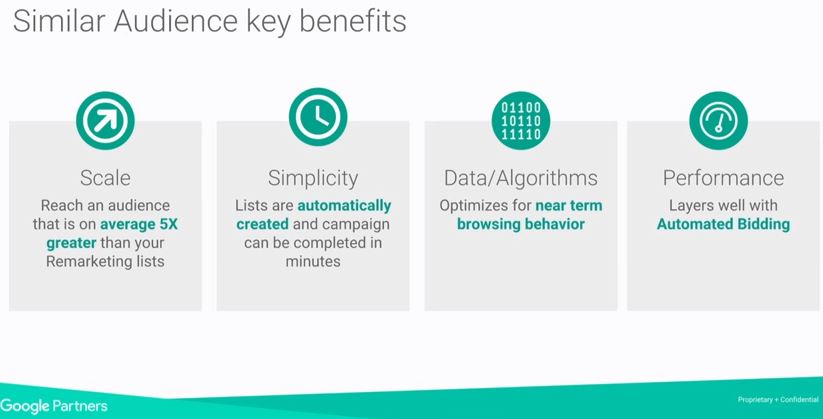 While these benefits are indeed nice to have, they will only be beneficial when similar audiences are understood and implemented properly. So Google provided the example of a department store using a gold rewards program. Gold rewards users are high-value customers for the store, coming in every few weeks to buy a new suit, pair of shoes, or pants.

The department will then take the list of gold rewards members and analyze various factors, including purchase intent, demographics, interests, time and geography, using machine learning. The list is then generated with users who have the same characteristics as the users in the remarketing lists.

Similar audiences work in all of the following:

Below includes the process for how similar audiences are created on a the Search Network:

Important tip: To get the most out of your similar audiences lists, be sure to take the steps below that include the best practices and implementation.

The screenshot below includes an introduction for similar audiences for Display: 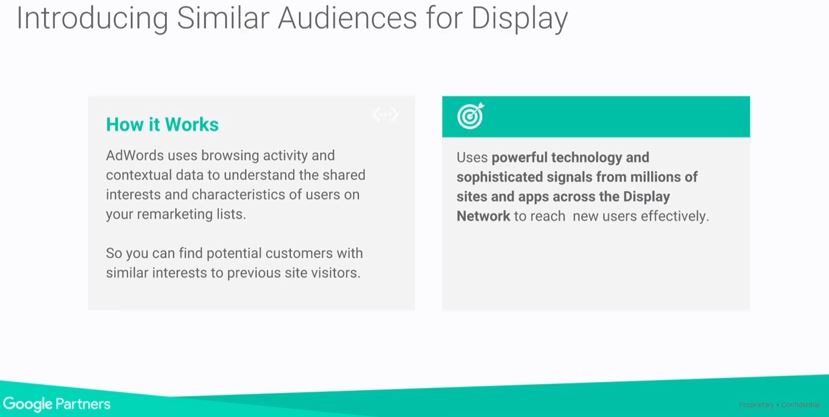 The steps for setting up a display campaign with similar audience lists includes the following:

How to Measure Success with Similar Audiences

While there is much data available within AdWords campaign, it is important to determine which metrics are most valuable. In the screenshot below, Google recommends to focus on the following: 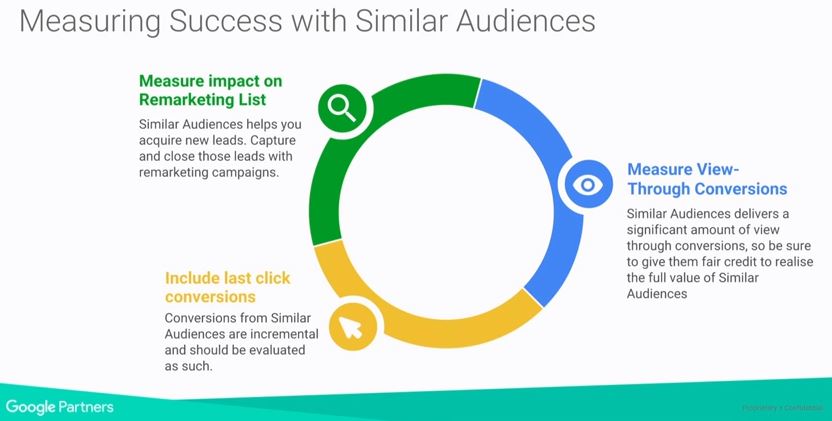 What to Avoid in Similar Audience lists 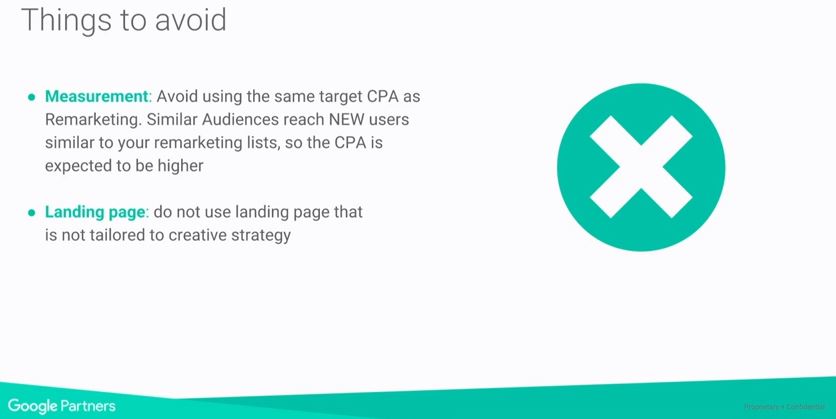 Brands Who Have Seen Success with Similar Audiences

Many large brands who have already implemented similar audience lists to their paid campaigns have already seen significant amounts of success after following the best practices. These brands include the following:

Help with Implementing Similar Audiences to Your AdWords Campaign

While it has been proven that similar audiences lists can drive traffic and conversions after set up and implemented properly, Google covered a lot of information that can be technical for many businesses. These campaigns can also take time to set up and monitor, something that many organizations don’t have due to their daily operations.

In these cases, it would be best to allow a professional to take care of this task for you. In fact, Google partners with numerous businesses around the world to offer additional help with AdWords campaigns. One such partner includes Proceed Innovative, an internet marketing agency that not only specializes in pay-per-click, but search engine optimization (SEO), and web design.

Our digital marketing experts are constantly setting up and updating campaigns after analyzing real-time data to maximize efficiency and conversions. In addition to our years of experience, we also attend frequent training sessions to stay on top of the latest trends and products released by Google. And after analyzing your audiences, traffic, and budget, we can add a similar audience list to your campaign, delivering results similar to the brands mentioned above.

Give us a call at (800) 933-2402 or fill out a contact form for more information or a free estimate on how we can help you take advantage of similar audiences. We look forward to working with you soon!